During one of our last days in Bali, we took a trip to Ubud! We hired a couple of drivers through a friend for the day.

Ubud is one of Bali's major art and cultural centers. The town was originally known for its medicinal herbs and plants and so that is where its name comes from. Ubud literally means "medicine" in Balinese.

One of my first impressions of Ubud was how calm it felt compared to back home in Jakarta. Funny, I'd never thought I'd hear myself calling Jakarta home, but I guess it technically is now, isn't it? Anyway, the lush, green scenery and the people brought about a sense of calmness to the area.

One of our first pit stops was to the Bali Zoo. 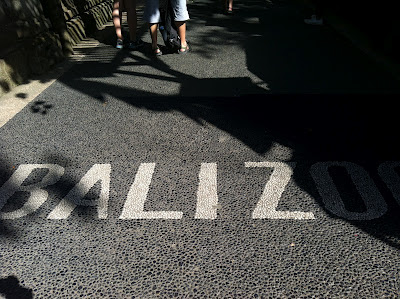 We passed on that one once we saw that it had a $24 entry fee for one adult. HELLO -- no thanks. I can see a zoo next time I go back home. I guess it would have been neat to see some animals unique to Indonesia but it honestly wasn't all that serious. That's what National Geographic is for, lol.

So the ladies left the Bali Zoo as the guys stood back and admired orangutans, bats, and elephants. Eduardo told us that he even rode one. He cracks me up. I called him Prince Ali once he told me how excited he was to ride an elephant. He said he felt that his entire childhood had been incomplete because he had never ridden an elephant before! Here's a picture from his Facebook. Can't you just see the excitement in his face?


I must admit, elephants are my absolute favorite animals so I am sad I didn't get to see one but that's okay. I have plans to visit the Safari here in Indonesia soon :)

Where was I? Oh, yes. So the ladies passed on the Bali Zoo, hopped back into our van and requested we go to The Sacred Monkey Forest!

At first I didn't understand why monkeys were considered so "sacred" to the Balinese people until we arrived and the staff provided us an informative brochure after paying our $2.00 entry fee. Score!

According to traditional Balinese Hindu philosophy, peace and liberty are only attainable when there is harmony between humans and the Tri Hita Karana Doctrine. The following statements are an excerpt from the information brochure explaining the three parts of the Doctrine:

1. The Gods blessed life and created nature and all of its contents.

2. Nature offers sustenance to support the needs and activities of human beings.

3. Human beings have an obligation to establish traditional village structure, to build temples in which worship, to hold various ceremonies, to make daily offering, to preserve nature and to solve problems together.

The last statement basically explains why we saw so many incense offerings (to both gods and animals), temples, nature, a sunset Hindu dance, and wild animals. The people here live a very simple life despite all the tourism and traffic that has weaseled its way in over the past decade or so. As you recall, there were offerings atop the volcano and in the taxis!

Despite all the distractions, the Balinese people still make time for nature and their gods. Many animals are free to roam as they please. We also saw so many hand crafted items made from wood, porcelain, and silver. We were free to visit any temples or other historical sites such as the Elephant Cave (more details in the next post) as long as we wore the garments they provided out of respect for their gods. I'd love to go back. They even had a graveyard for the monkeys.


We were instructed to treat the monkeys with respect since the forest was "their home" and we were a visitor in it. I was so nervous. Prior to Bali, a friend of ours had informed us that the monkeys were aggressive! Before we even entered the forest, there was a lady selling bananas. I passed though because I knew that would make me an instant target for the monkeys. Maybe next time! Haha.

It was quite shocking to see these little guys just roaming the sidewalks, swinging from branch to branch, or carrying their young. Many were just sitting on ledges, cracking open coconuts or eating sweet potatoes provided by the staff. Visitors were free to feed the monkeys the bananas you could purchase from the gate and if you weren't careful, the monkeys would also go for a water bottle or guide book if it was hanging out of your side pocket!

The monkeys in this forest were called Balinese macaques aka long-tail macaques or the macaca fasicularis for all my fellow science nerds out there. ;) They are the most widespread primates apart from humans! There were about 605 of these guys in the forest alone -- 77 males, 194 females, and 334 young. They live in clusters and use different areas of the forest during different times of the day, otherwise conflicts may arise. The adult males have beards and the adult females have mustaches. Both the males and females are very mothering towards their young but some can be very permissive.

One monkey actually stole a man's guide book and took off with it down into the forest. He went after him! I couldn't believe it. He did get it back.

Our dear friend Danna actually had her water bottle stolen and she went for the monkey and grabbed it! We screamed, "DANNA!" She admitted she wasn't thinking and that grabbing the monkey probably could have harmed her more than it would have him but at the time, she just wanted her bottle back! Thankfully, with the help of one of the staff members, the monkey was distracted and she put it back in her backpack... side pocket! We laughed and suggested she zip it up inside.

It was so intriguing to see how the monkeys reacted to those who tried to hang out with them. What do I mean? Well, the monkeys of course were free to roam as they pleased and visitors could sit on ledges and monkeys would usually be interested. However, they didn't take a liking to everyone who tried to befriend them. One particular lady should have just given up. I cannot even begin to count how many times her hair was pulled, how often her things were stolen, and how many times she was bit or spit on!

But then at other times, there would be a random gentleman from the crowd who was like the Monkey Whisperer! These monkeys were fascinated with him. They just sat in his lap or upon his shoulders.. it's almost like they could sense his inner calmness or something. I posed with the monkeys but I didn't try to hang out with them, lol. I'm not that brave yet!


Here's some footage of a little boy teasing a monkey with food. At first, I thought the kid was going to get attacked!!


Here are some more pictures from the forest.


Here is some more footage of some monkeys cleaning each other.

After we were done looking at the monkeys, we went to check out the small art gallery located at the end of the forest. I have a new love for painting, especially after I discovered I'm not so bad at it.. and I was so amazed and glued to all the wonderful paintings, drawings, and sculptures! They were all so unique; unlike anything I have ever seen before. I took so many pictures but it would take too much time to upload them so here are a few of my favorites!

You can see the love for nature and meditation these people have as it is expressed in their rich paintings. If only I had enough money, I probably would have purchased one.. and probably will before I move back to the States. :) I've got to make it my prerogative to visit another art gallery soon. I am absolutely in love. These are for you Amanda!

My next post will be about the temples and sightseeing we did after we left the forest!

Posted by Amber Yarbrough at 10:41 PM