My First 10K was with Darth Vader

This past Sunday, I ran my first 10K race. I have ran numerous 5Ks in the past and I have ran 6 + miles on a treadmill before, but never in a competition. 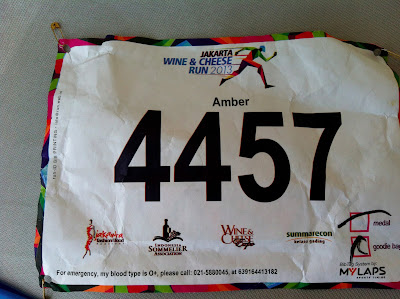 Thanks to Terence, I was persuaded (if my 3rd graders are reading this, hey guys -- that's a spelling word!) to compete because of the "free" wine and brunch that was to follow. I was really hesitant at first, mainly because I knew it would occur my first free weekend in May in awhile. I gave in, naturally, since I basically cannot say no to running outdoors. I can be convinced almost every, single time.. but I'm glad I went!

I woke up early Sunday morning and boarded the transport at 4 am. Many of my close family and friends know that I am not a morning person. I get irritated anytime someone tries to strike up a conversation that early. Poor Ryan, I have snapped on him so many times... Anyway, I took the front seat the moment it was available and slept!

We picked up some of the other teachers. There were 8 of us. Mr Bryan overslept and missed the race! We were running super late (haha -- running, get it?) and arrived just two minutes after the gun shot went off. We dodged old women and had to circle around the start line to make sure our chips registered with the timer. We're such dorks. We were laughing the whole time as people just shook their heads in shame. And then we were off!

I got a good start and was feeling pretty good about myself until Jane passed me. Man, she is fast. I need to start training with her.. :) My goal was to cross the finish line in an hour and 20 which I did! An hour and 19 to be exact. ;) If I had trained better, I'm about 80% positive I could have made it in an hour and 10 minutes. I think I'll shoot for that next May when I run it again. Props to the guy from Kenya who ran his in 32 minutes. -___________-

The race itself was an interesting hour and 20 minutes to say the least. I had completely forgotten there was an optional costume contest under the theme science fiction. Kevin Moon would have absolutely LOVED it.


I woke up as soon as Darth Vader past me. No, seriously. And then he was followed by one of the natives from the Avatar movie. I also saw characters from Ghostbusters and Wolverine and Storm from X-Men! It definitely kept the race interesting.

The races in Jakarta are much different from those I have experienced in the States. One of the biggest differences I have noticed is that:


Many of the locals will stand out from their homes and watch. Men on motorbikes will honk and cheer you on as little children run barefoot with a kite trailing behind in shrieks of excitement of the "bule" running down the street (although these days, I tend to blend right in).

The exhilaration you feel as your feet pound the pavement cannot be put into words. Many of my friends and family who despise running will probably never understand this runner's high that you get but it is as if all the stress melts away. I think I was most excited about the costumes. Every kilometer or so, I would see another interesting costume that Kev would have loved. So that put a smile on my face. It kinda felt like he was there.

After what felt like eternity, I finally crossed the finish line, followed by Darth Vader (no, seriously). He even swung his light saber as the paparazzi snapped a billion photos. Classic.

We were greeted with smiles, handshakes followed by a heavy gold medal which was placed around our necks. Water was served left and right, as well as bananas and electrolyte replenishing drinks. We also received a goodie bag with a free liter of SOY MILK! I was ecstatic. :)

After chasing down and snapping photos with all of our favorite characters from the race, we headed off to the brunch and wine. I haven't had a glass in awhile and it was absolutely delicious. I felt like such a wine connoisseur as I told people what would satisfy their taste buds. "Oh, you're looking for a sweet but not too bitter? Definitely go with the Riesling." I could have bar tended! I guess those restaurant days came in handy. 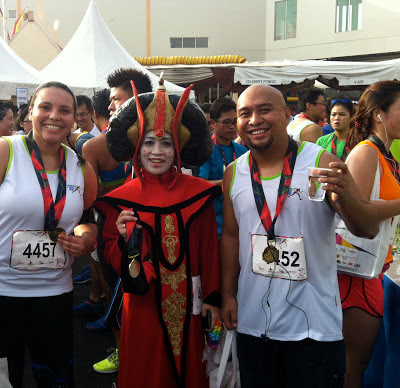 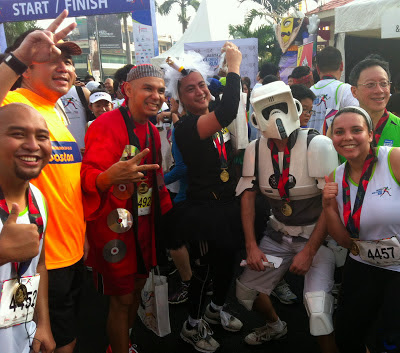 Hope you enjoy the pictures. It was a really great day but I must say the best part was the 6 hour nap I had after. ;)