I have so many blog updates to post for you guys. However, I am starting to realize I am not superwoman. :) So I will just post as many as I can, especially when there are super exciting events that I really want to share! Since today was a pretty eventful day, I thought I would post about my first ever 5K in Jakarta.

A couple of weeks ago, one of the P.E. teachers named Almer at Bina Bangsa organized a sign up for the annual Jakarta Heart Run, which is located by Monas, the national monument. The Heart Run consists of a Fun Walk, a 5K, and a 10K. Originally, I was going to run the 10K since I ran 5Ks all the time back home in the States.. but with recent events.. I wasn't in the mood to start training. So, instead I signed up for the 5K! Better to run than not do anything at all, right?

I was dead tired, but I honestly couldn't have asked for better timing. The amount of stress I have experienced as of late is incredible. I know I shouldn't complain.. but I'm just so heartbroken about Kevin. I know that moping around the apartment is the last thing I need to do.. and that I need to appreciate every breath I take and the fact that I can walk and can go to work in the morning and Kevin can't. But it still hurts, a lot. The things I would do to turn back time and spend just one more day with him..

School transport was arranged for 4:30 this morning. YIKES! I was an absolute zombie. I stayed up late the previous night texting Kev's sister for updates. He's still hanging in there but his current state is progressively getting worse. He's dying and I am heartbroken. But I knew I had to run this race for him. No excuses! Kev was always so determined.. and so that's exactly what I did.


Sure, it was hot. It was humid. My hair was a big frizz ball. I felt so out of shape, especially after seeing the Kenyans! I tried to get myself in the zone and focus for the race.

People often wonder how people can run, especially long distances.. it's really all mental. Most of it. No matter how tired you get, it's like once you hit that 1 or 2 mile marker, you feel like you could go on forever. The euphoria you feel after is definitely worth it. Some people call this the "runner's high."

The 10K runners were up first. There were thousands of people! Women, men, and children of all ages, ethnic backgrounds, and religious affiliation.

I had my playlist set and before I knew it, the gun went off and my feet were pounding the pavement.


My timing wasn't phenomenal, roughly 35 minutes to be exact. But hey, you know what -- I'll take it. I'm starting to realize more and more each day how blessed I really am.

I saw bikers, Kenyans, Bules ("white people"), and children and adults alike running barefoot.. even though I was often passed.. I was one of the first girls done :)

Terence ran the 10K. He ran alongside an 85 year old man who was insisting the walkers pick up their pace. "I'm 85! Why are you walking?!?" The run was fairly easy considering the humidity. Unlike Tennessee, Jakarta is relatively flat so there were few inclines we had to battle. We ran around the water fountain as crowds of people cheered us on. 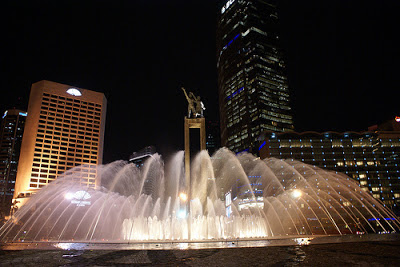 I wasn't even focused on my music. Instead, I prayed for endurance as thoughts of Kev filled my brain..

Before I knew it, there was a red ribbon around my neck and I was carrying a bag with a banana, Procari Sweat (the equivalence of Gatorade/Powerade here), chocolate milk, and a bottle of water ("air mineral".. pronounced EYE-YEAR ME-NAHRAL).

I found a cozy spot on a curb and waited for the others to arrive. We talked about the incredibly fast Kenyans and the comfort of our beds.

Some women in headscarves asked to take some pictures with Eduardo, Andrew and I.. maybe because we were American.. you become a bit of a celebrity here. :)

After what seemed like 100 photos and a good 45 minutes in the parking lot due to typical traffic, the windows were down and we were on our way home.


I filmed our trip home to help capture some of the every day sights here in Jakarta.. it was quite a relaxing ride.. windows down, hair blowing in the wind.. when suddenly we heard a popping noise and saw smoke! We all ducked in the van, thinking it was gun shots!