Lizards are smarter than you think (Tidung, part 3)

After hanging out with our new 12 year old friends, we decided to venture out to the isolated island less than a mile away. Nicole, Lynsey, and I were spontaneous and went for it. We stripped down to our bikinis and off wading into the water we went! Aasha and Danna soon followed behind while Julia stayed behind to hang with the kiddos and snap photos. And protect our things.. 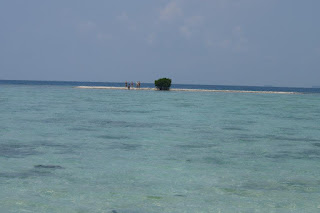 The water was so blue. That is the only way I can describe it. It was amazing to be able to look down at the water, regardless of depth and still be able to see my toes! It was very similar to the water in Bali at Padang Padang beach in Uluwatu (see picture above). The journey to the remote island was fairly calm. I was expecting waves but there were very few - maybe a slow tide every once in awhile but that's it. As we went deeper into the sea, we noticed the pathway was getting slippery. Turns out there was algae or something similar covering the sea bed below. At one point, we reached a fishing line. We were a bit paranoid to cross it as we did not know why a random fishing line was so elegantly placed in the Java Sea as it served as a bit of a border. Were there sharks?

Being the tough little ladies that we are, we rebelled, and stepped over the line. I think I was secretly waiting to be shocked by some voltage as I have quite the imagination. But yet, nothing until I suddenly saw a dark shadow below. I had convinced myself it was a stingray. I had flashbacks to one of my favorite childhood TV shows, The Crocodile Hunter. God bless his soul.. but I did not want to be next.

Turns out the "shadow" was an old t-shirt. False alarm.

We eventually got within meters of the island but we were a bit disappointed to find out that it wasn't traditional tropical sand we thought we were seeing from afar. In actuality, it was coral as the painful nerve-endings in our feet suggested. If you've never stepped on coral, you're missing out. That 'ish hurts. Like, I literally felt like I was walking on glass. But I'm not much of the complaining type and quite frankly, it bothers me when other do because you can't really control the world anyway.. so Lynsey, Nicole, and I manned up and went for it. We started crawling, thinking that might be the best strategy as we could just pull ourselves with our hands instead of risking an uncomfortable fall below. Being a bit in control was comforting and we soon made it to the island's edge. We then stood up and basically ran (if that's possible in water) across the remaining coral's sharp edges and climbed, dripping wet and stood with pride, knowing we had accomplished such a daunting task.

After frantically waving our hands in the air as we requested Julia to snap some photos of our hard work, we ventured back to shore.

After getting dressed and bidding our local friends goodbye, we saw something run at full speed in to the water not too far from where we were originally standing. This guy had to have been hanging out in the weeds while we  were in the water. Can you imagine what kind of story that would have been if we were actually attacked!? Swear on anything it was the cousin of a Komodo dragon.

If you don't believe me, ask my friends. I could have been eaten alive! :O

After some extensive research (thanks Google), I believe we came across what is known as a "Monitor Lizard", an all too common reptile in the tropical regions such as Africa, Indonesia, Australia, and the Philippines. Not only are they carnivorous (they eat meat, for all your noobs out there), but additionally, research has suggested they can count (humans?)

After wiping away some sweat and laughing about our near death experience, we biked home in anticipation for our next adventure -- finding Aasha!