We just spent 8 amazing nights in Bali. School ended on a Tuesday and I had a plane ticket booked for Wednesday. Teaching is exhausting! I was ready to escape Jakarta for a while and just focus on some much needed relaxation.

I tried to "pack light" but you know me.. I packed enough for three people and even brought along our iron which I may say came in handy! Sure, I was teased for bringing such a "big suitcase" but I thought I did pretty dang good considering I had actually brought my "small suitcase" :) My friends may have given me a hard time at first but I was the first person someone came to when they needed to borrow a shirt for the night or my hair straightener. Just sayin..

Anyway, the airport was a disaster as usual. The lines were enormous. Thank GOD the airport had AC or I probably would have lost it. Aasha and I spent what seemed like forever running around the airport trying to get checked in. My luggage was extremely heavy, go figure so I had to pay an excess in weight fees. The weight fee ended up being like $60 something dollars! My mouth almost hit the floor. In order to avoid even more fees on our return flight home, we decided to go ahead and check in/pay for our luggage on the way back. My suitcase was already at 18 kilos and because I anticipated doing some shopping, I went ahead and paid for a 25 kilo fee just to be safe -- but of course, I had to go back OUTSIDE of the airport to settle all of that. Seriously, who puts an office outside of the airport? Especially knowing people are going to need it before they depart? This place can be so annoying sometimes..

After I paid my fee, Aasha paid for hers. I was getting so irritated with the man behind us. There is NO such thing as personal space in this country. I could literally feel this guy breathing on my neck and eye contact doesn't help either. I would have excused him if he was Indonesian but he wasn't. He was straight bule. Back off dude, seriously.

We eventually caught up with the rest of the crew by Starbucks relaxing until it was time to go through security. I purchased my all-time favorite drink - Chai Tea Latte with Soy (no water) and a Blueberry muffin for breakfast. I must say, the Starbucks here never fails to disappoint. Everything tastes so much more fresh and they actually put the tea bags in your cup. One of the few Western companies that goes above and beyond here.

After paying our airport tax, we sat down by our gate and anxiously awaited to board the plane. It was delayed. There were so many people waiting to board the Bali plane! People of all different ethnic backgrounds, mostly white and Chinese.

They eventually announced our plane was boarding and we were on our way. Unlike in America where you typical walk in a covered type bridge to board your plane, we had to walk down some steps, exit the airport, and walk to our plane. After carrying my purse and backpack in the heat, I was kind of bummed that Air Asia didn't provide a snack or any time of beverage free of charge. Sometimes I miss Southwest Airlines. After paying like $3 for a small bottle of water, I passed out. Before I knew it, the plane had landed!

Us ladies met up with the guys who were chowing down on some KFC (no mashed potatoes here, by the way, just rice). Of all people, I was most surprised to see Joe from Semarang. Last time I had checked, he wasn't going because he booked the wrong flight. I guess after some whiskey, he gathered up the courage to purchase a last minute ticket! He's always so much fun so I was happy to see him.

Anyway, repulsed and in need of something a little bit more appetizing, we sauntered over to small cafe and ordered sandwiches. You would think with all the traveling that we do, we'd want to try some exotic food -- but honestly, there's nothing like a chicken sandwich and french fries after a plane ride. Plus, we ARE on vacation you know.. nasi goreng ayam (chicken fried rice) gets old after awhile.

After bargaining, we caught a taxi and all headed to Seminyak in Bali, which is where our hotel was located. The taxi driver spoke decent English, surprisingly -- something we aren't quite used to in Jakarta. He informed us that with all the tourism that Bali gets, the locals pick up the language fairly quickly. They also learn some English in school. He asked the usual questions - "Where are you from? How long in Jakarta? Bali?" As soon as any taxi driver hears the word "America", their eyes light up and they say "OBAMA!" with so much enthusiasm you would think he was American himself. We always just giggle and ask about "George Bush" to which most (if not all) taxi drivers look at us like we're crazy and then holds up a fist in anger. They really dislike him here. But no fear, I'm not here to make enemies! We kindly remind him that we don't like Bush either and then all is well again.

After taking a bumpy, gravel back road and passing rice paddies and tourists, we soon arrived at our hotel in Seminyak. It was beautiful. We were welcomed by the staff with these delicious "mocktails."


Here are some pictures of our hotel! The guys had their own place with a private pool and the ladies had their own family suite. We each claimed bedrooms, unpacked, and got ready for the beach. Here is a picture of the hotel from Lynsey's Facebook.

The first thing that some of did was change in to our swimsuits and head to the local beach, called Petitenget while some of the others went shopping but planned to meet up with us later. As soon as we arrived, we were quickly informed by a posted sign to continuing walking left as the entrance was reserved for religious Hindu ceremonies, even though at first glance it looks ideal for tanning or swimming. However, it was considered rude to lounge around for any other purpose so we kept walking.

After walking on the scorching hot sand for 5 minutes or so, we found a cozy spot, rented some cushioning chairs for $5 for three hours and vacation officially began.

We saw some pretty cool sights on the beach. Horses for one! For a split second, my mind was filled with memories of Tennessee Walking Horses trotting in vast green fields. Nothing like home. 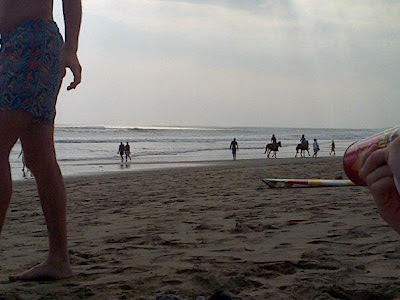 I was quickly entranced by a sign advertising Henna, a temporary tattoo art that originated centuries ago.


An Indian friend from high school always had these and I have ALWAYS wanted to get one! So without hesitation, I marched over and had the artist hook me up. I love it. It's still on my foot -- although it is beginning to fade. However, I am now more inspired than ever to go through with getting a special tattoo that I have wanted forever on my hip.. before my world traveling comes to end.


The guy was pretty chill. He used this Henna tar like substance from a Henna tree and mixed it with flour which produced the black stuff you see that he's using. He used a metallic type tool to apply it. It didn't hurt -- after all, he never punctured the skin. :) 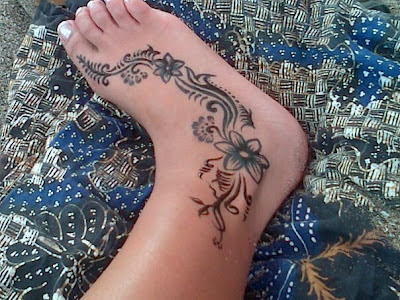 The creativity of the Indonesians in general continues to amaze me. He did my Henna tattoo all by free hand. Amazing.

I went back to my tanning session soon after.

There's nothing like laying out in a cozy chair by the ocean, listening to your iPod, and feeling a cool ocean breeze as you fall asleep and soak up some rays. Being the stubborn person that I am, I refused to lather up with sunscreen even though my fellow pale amigos insisted I do so. I shouldn't admit this but I don't wear sunscreen, ever. Sure, Tennessee is hot and humid and the summers can be brutal, but the sun also doesn't shine directly on you for hours at a time. I've never really burned until I went to Bali. It was really my face that took the hardest hit. I should know better though. It didn't really hurt. My face just felt warm.. and looked red. Ick. I felt like my mom for once. She burns like a tomato (sorry, Mom). I didn't really feel the effects of not wearing sunscreen on my face until a few days later when I started peeling. I wanted to go into hiding.. and did for a night or too.. some might say I'm vain.. but this whole face peeling thing was new for me. Anyway, I have learned my lesson and will now be applying sunscreen generously, especially when tanning by the equator.

Anyway, that's all for now folks. I will submit part 2 tomorrow. I need to get some lesson planning and marking done since school starts tomorrow. I've missed my kiddos but boy am I'm gonna miss sleeping all day.